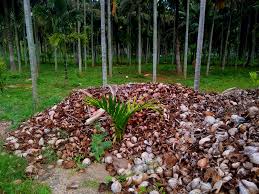 Swetha and her husband, two doctors in chemistry and microbiology, created the start-up Niranthara Cokonut. Their objective? Establish a zero waste and sustainable coconut sector, from the coconut grove to the sale of the product and the composting of waste on their farm.

India is the world’s 3rd largest producer of coconuts. Through the multiplicity of its products and uses, the coconut tree is a cultural symbol that is highly synonymous with abundance. With the emergence of an Indian middle class, the domestic market is evolving and Niranthara Cokonut is making the bet to create new products with higher added value. Take the example of tender coconuts (still immature), from which coconut water is extracted because it’s at this stage that they contain the most coconut water. Sold on the street, merchants open them on request with a machete to access the precious liquid. Consumption takes place on site and empty nuts are returned to the merchant (for uncertain use/recycling). Niranthara Cokonut takes over this coconut water consumption from the fruit, but has developed a process that allows the consumer to pierce the coconut himself, quickly and without a machete. A product with higher added value that can be kept for two weeks and that doesn’t compete directly with street merchants since it is sold in cinemas at 65 INR, which is a little more than 0.80 € compared to 20 INR on the street.

We visited the production unit in Bangalore, which employs 6 people. And we also visited their own 2 hectare coconut grove, where we were able to learn more about this crop that was completely unknown to us!

Their farm is located near Savandurga, a famous monolithic hill to the west of Bangalore. There they take care of recovering the coconut shells from the production unit and crush them in order to add them, with a microbial solution, at the foot of the trees as compost. 2 employees, living on site, are in charge of the operation on a full-time basis. Thanks to this compost they do not use pesticides. They use only a few fertilizers, some of which are naturally provided by the excretion and dung of the cows grazing between the coconut trees. They also showed this technique to farmers in the surrounding coconut groves in order to raise their awareness of a less environmentally damaging way to produce coconuts. With this system they produce about 10,000 coconuts per year per acre (~4050m²). To increase their production, they have joined forces with 2 coconut growers’ federations, i.e. nearly 2000 farmers.

On their production unit they cut and prepare coconuts with two main products.  One, a coconut ready to be pierced by the banana leaf straw provides and the other when the coconuts are not to the right standards, the coconut water sold in a soft plastic flask. In both cases the coconut returns to the farm and the Malai, the white flesh, inedible at this stage of maturity, is sent to ice cream factories to extract the “coconut milk”.

Thank you to Swetha and her husband for this day spent with them. We wish them a good continuation in their projects!