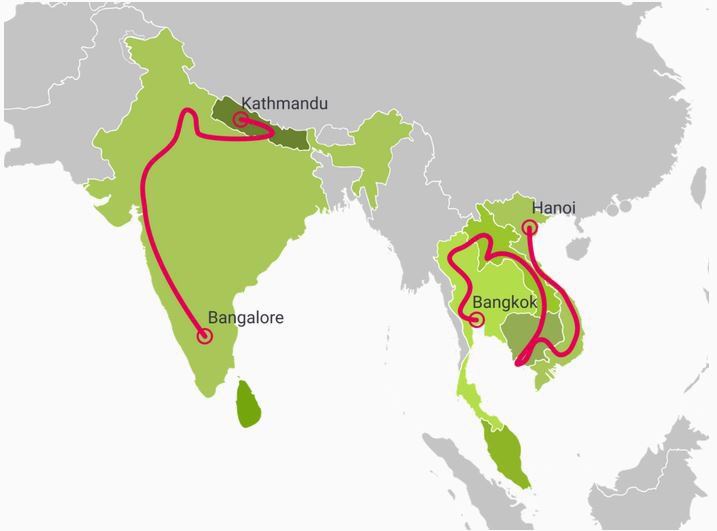 Now it’s time to start the biggest part of our trip, the #Expé1 is now in India for 10 weeks. Enough time to cross this gigantic country (by train and bus only) and meet its population. The second largest in the world with nearly one billion three hundred million people! In this period we find hot temperatures in the north with an average of 43°C during the day and 30°C at night. In the south the temperatures are milder and the harvest should arrive at the end of June with a little delay. There are 22 recognized regional languages including Hindi, the official national and government language and the majority in the north of the country. The 23rd language of the country and second national language is English, which the Indians speak among themselves when they do not have the same language of origin and is also the language of instruction.

During our first month in the Indian subcontinent we met 5 projects. In New Delhi, Jaipur and Bangalore, these projects concern the management of waste through the use of compost, the improvement of food quality, the help to the most deprived populations and farmers (50% of the workers) as well as the limitation of food waste! 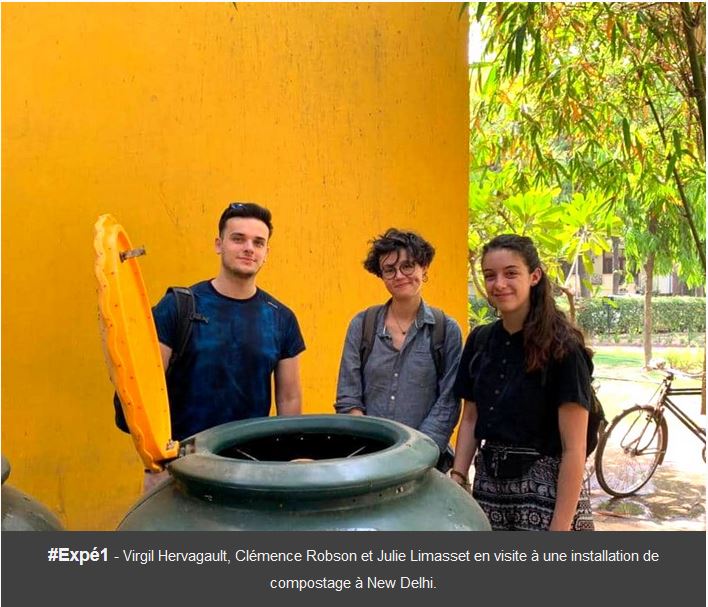 After a first month in Vietnam, the #Expé2 went up Cambodia and then Laos during the month of May. These two countries with young populations are still marked by the wars of the 20th century, and the circular economy is for the moment more present in the agricultural sector.

With respectively 50% and 70% of their active farming populations, Cambodia and Laos are countries shaped by traditional food-producing agriculture, which is beginning to open up to new production methods. Five initiatives were encountered during this period: projects in agro-ecology, the exploitation of ecosystem services and the valorization of agricultural bio-waste, representative of what is being implemented across the countries.

We are now heading towards Thailand, a country to which we will devote the month of June. We look forward to sharing with you the future projects we will meet! 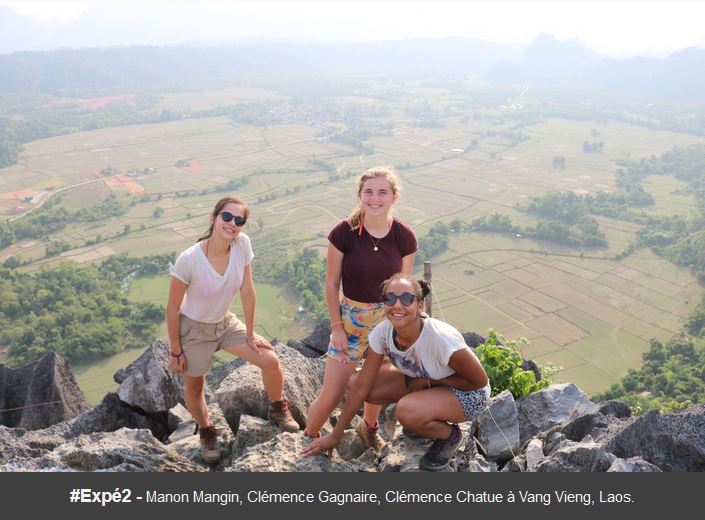 With this company, Neha Upadhyaya is helping the village of Tamachik. Located in the heart of the mountainous region of Kashmir, in Ladakh, she was able to turn it into an eco-village. It has provided the inhabitants with low-tech solutions adapted to their needs, such as a solar dryer for apricots. They are easy to assemble, transport, use and inexpensive.

Their main production is organic apricots. Before its arrival, there were a lot of losses due to the low storage capacity and the short lifespan of the apricots once picked. Dried organic apricots have a shelf life of 2 years compared to 2 days for fresh non-organic apricots and sell them more expensive while having 30% less loss.

Guna has enabled this village to switch to organic production, and also allows the maintenance of agricultural activity and supports the emancipation of women. With this success, Neha is happy to have 8 other surrounding villages that wish to follow the same path. 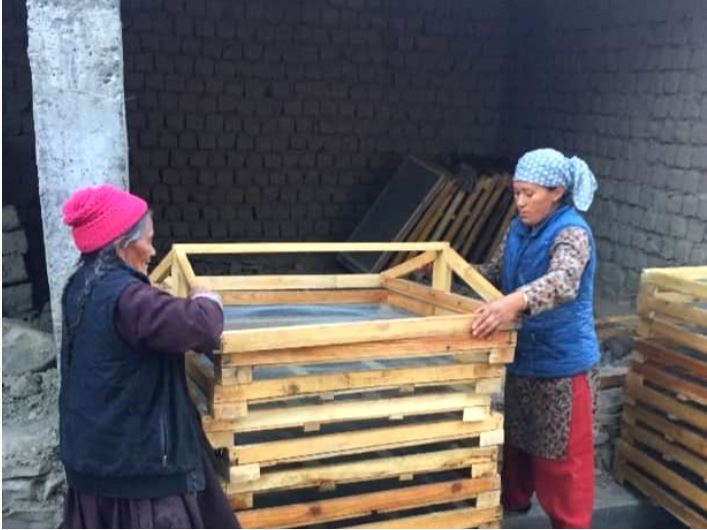 Naga Earth is a company located in Siem Reap, Cambodia. Initially created as an NGO, Naga Earth’s first project was to create a process to transform cooking oils from restaurants into biodiesel. Like other Southeast Asian countries, Cambodian cuisine requires a lot of cooking oil, which is often thrown away without treatment. In addition, in order to save money, most restaurants reuse the same oil many times, which has a very harmful effect on long-term health. Naga Earth thus provides 5000L of biodiesel per month to its customers. The co-product of the process of transforming the oil into biodiesel, glycerine, is transformed into soap which is distributed free of charge to humanitarian associations in the region. Glycerine is also used to create cleaning products sold to businesses. In both cases, the products are delivered in returnable packaging to save plastic.

In addition, Naga Earth is experimenting with a plastic recycling system using four machines under construction. The latest project to date is the purchase of a machine to crush glass bottles and reduce them to sand that can be embedded in concrete.

In addition to its commitment, Naga Earth wishes to transmit its knowledge to as many people as possible through collaborative workshops! 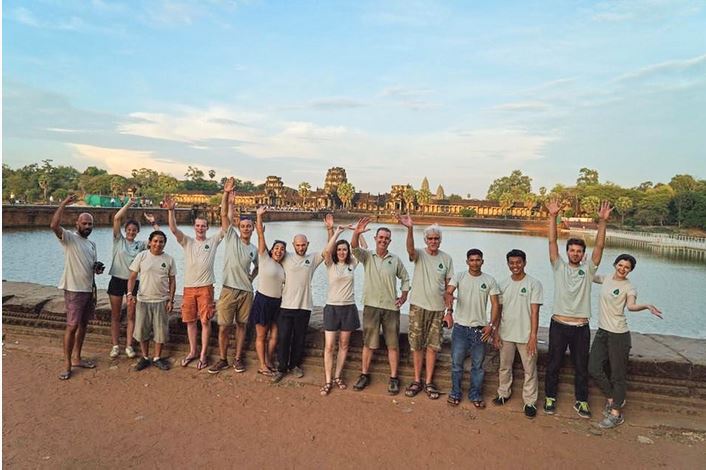 CirculAgronomie is an association created in 2016 by two AgroParisTech students as part of a gap year project. Our ambition is to link circular economy projects around the world in the fields of agriculture and food industry. We analyze their social and environmental impact and their reproducibility through the seven pillars of circular economy described by ADEME. To do so, students in gap year carry out expeditions to different countries every year. This year, we will be 5 students… in France! 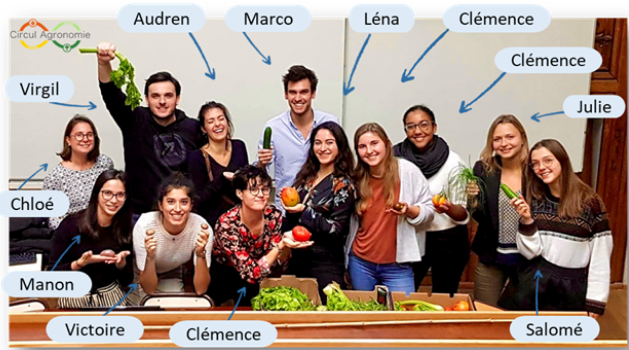