A multitude of vegetables grown hydroponically.

Jeremy and Pierre met in 2016 in an agricultural engineering school in Toulouse (ENSAT). Both are passionate about water management in agriculture, so they had the idea to carry out their own project and to start growing hydroponic crops. During their studies, each of them trained and tested themselves by working in structures already completed.

In his last year of engineering school, Jérémy started a double student entrepreneurial course: he began his installation on a family plot of land. Pierre, for his part, is doing a double student entrepreneur diploma. Thanks to the help of caring teachers who have opened up a wide network for them and to their personal investment, they lead to the creation of an EARL in January 2019, including the pilot farm of Île aux légumes and the Aquacosy Development consulting office.

The first harvests took place in the summer of 2019, and it is worth noting that the entire structure was built by them: from the cultivation bins to the water circulation system. They have received very strong support from Initiatives France Tarn-et-Garonne and the Montauban Urban Community. 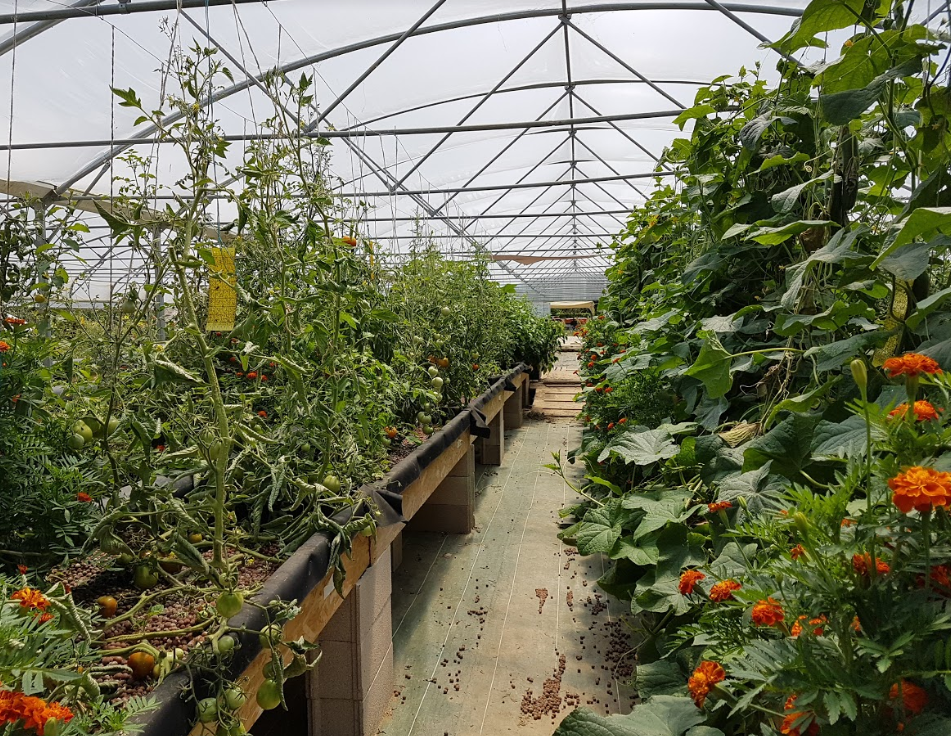 One of l’Île aux légumes’ greenhouses 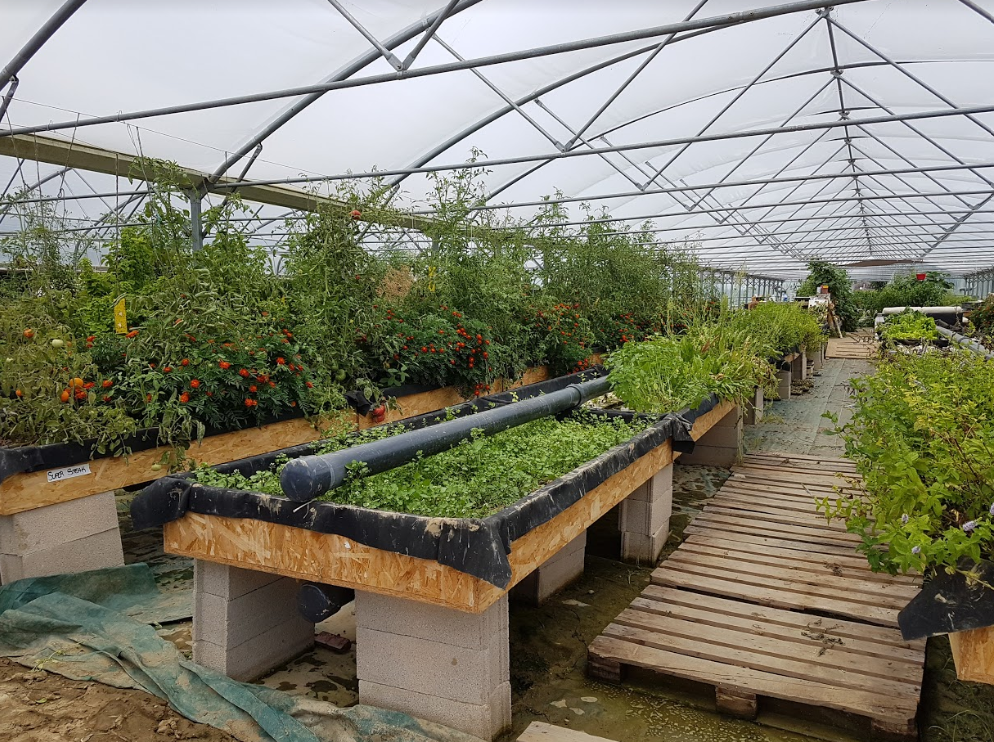 One of the 4 greenhouses of the farm

They encourage the consumption of healthy, pesticide-free products that are grown using an innovative water-saving system. Direct sales in the form of on-farm pick-your-own products make consumers aware of this new method of cultivation. Moreover, the choice to use only actors from the Montalbana region helps to keep the local economy going. Customers also take part in this economy by consuming products from l’Île aux légumes.

Hydroponics is a method of cultivation above ground where the roots of plants are directly immersed in water or on an inert medium (sand, gravel, pozzolan, clay balls…). The water in which the roots are immersed is in fact a mineral nutritive solution that will bring all the necessary nutrients to the plants. Plants whose roots are directly immersed, such as salads, rest on polystyrene rafts while others, such as tomatoes, take root on clay balls. At l’Ile aux légumes, clay balls were chosen because they allow a good bacterial balance and limit the presence of problem bacteria in the water. 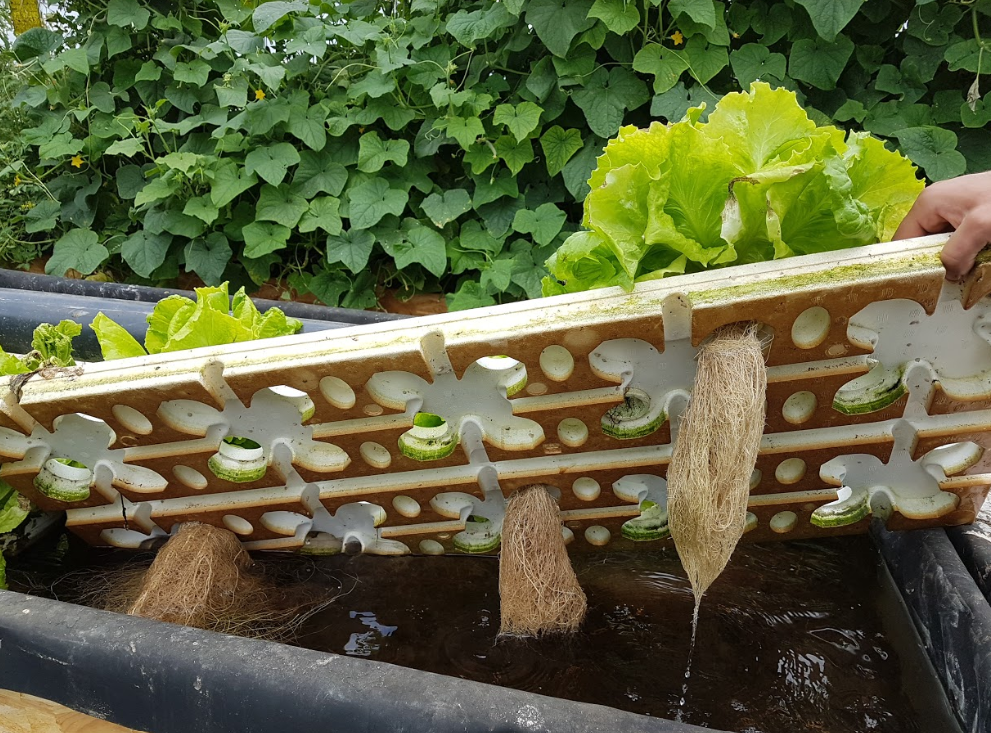 Salads are grown on Styrofoam rafts 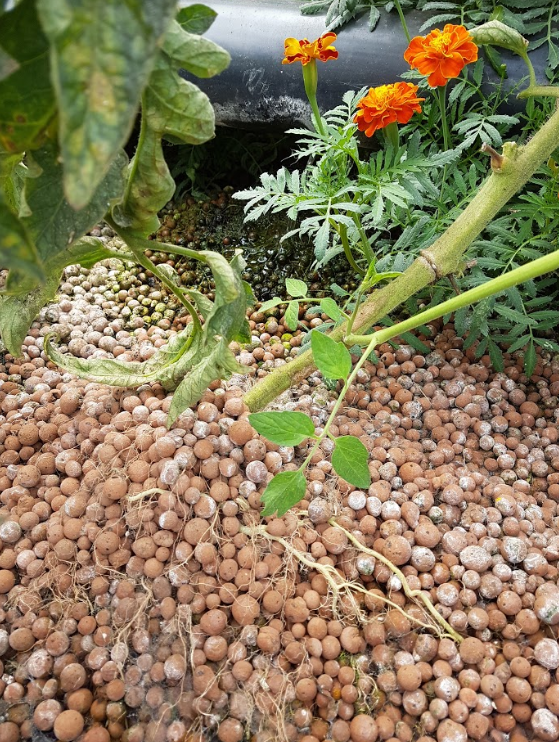 Tomatoes are grown on clay balls

The greenhouse of l’Ile aux légumes covers 1500 m². For this surface, 360 m3 of water are used each year on the 4 independent basins.

In terms of energy, there are 6 pumps that consume a total of 4.5 kW, the equivalent of 3 households of 4 people. The greenhouse has an inflatable double wall (DPG) which reduces the thermal amplitudes of 5-8°C inside: it is important that the water in the system does not have too large thermal differences.

Jérémy is in charge of vegetable production, he adopts an experimental approach in his greenhouse since few references exist on varieties adapted or not to hydroponics. He tries everything: varieties considered as adapted to this method of cultivation but also those that are not. So far, the conclusion he has drawn from his experiments is that all types of varieties work well in hydroponics.

This method of cultivation also allows him to significantly increase plant density: 3 times more plants per m² for tall crops (tomatoes, cucumbers, peppers, etc.) and 8 times more plants for low crops (salads, herbs, mustards, etc.). For Jérémy, “the key is diversity”: this is why around sixty different varieties are grown in the greenhouse, in order to maintain a good balance and limit potential pests.

No fungicides or insecticides are used, to control insects he uses sticky traps.

Vegetables are sold directly from the farm, to a farmers’ association that resells baskets or to Montalbanais restaurateurs (18 restaurateurs are supplied to date). 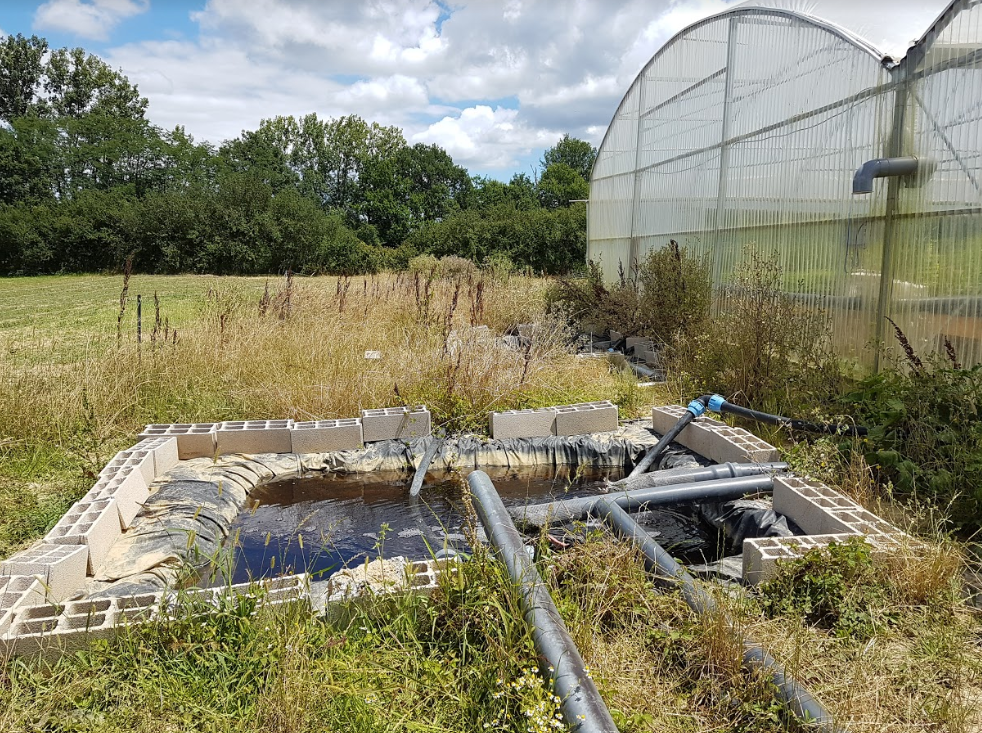 One of the four basins that supply the greenhouses with water

Pierre and Jérémy are very keen to raise awareness on the issue of water, particularly as it is used in agriculture. Their idea is to popularize and develop techniques of off-ground cultivation still unknown today such as hydroponics, aquaponics, bioponics or aeroponics. These methods of cultivation allow considerable water savings. They consider that this is not THE agriculture of the future but AN agriculture of the future whose agricultural model still needs to be developed and improved.

Through their consulting activity, they help project leaders to dimension such systems or advise important existing structures to adapt their equipment to hydroponics and to develop water. They also participate in a research programme with INRAE and CNRS on water quality. 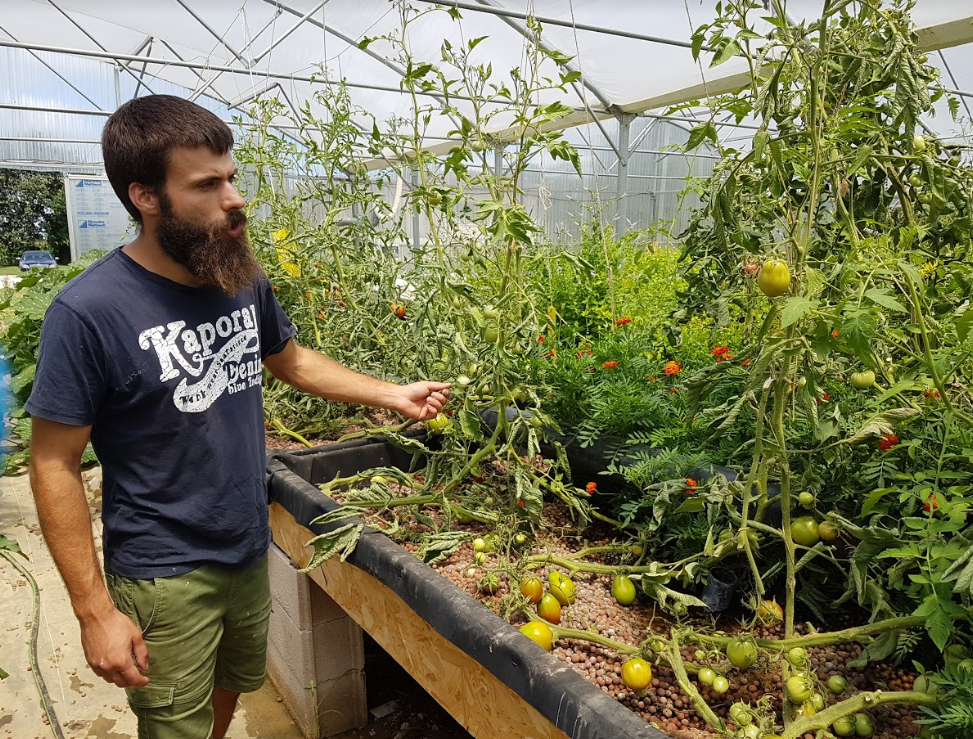 Thanks to his experience gained from his studies, internships and his own farm, Jeremy can advise on off-ground cultivation techniques.

The hydroponic system consumes 10 times less water than conventional agriculture. In addition, no pesticides or fungicides are used to treat the plants and the operation of such a system does not require the use of diesel fuel.

With the 18 restaurateurs supplied, the greenhouse is profitable, they are making a profit, but there are still some additional outlets missing so that Jeremy can make a living from the production of vegetables. The economic benefits are mainly to the local economy, which they strongly encourage.

Such a business creates local dynamism by making the local economy work: through suppliers (seed companies, materials, clay balls…), the restaurants provided and the clientele which remains strictly montalbanaise. For them, calling on local actors is essential. It should also be noted that they practice competitive prices: vegetables are sold at the same price as in supermarkets, which allows consumers to have access to responsible, healthy and quality food at very affordable prices.

There are many advantages that make such a project replicable:

Nevertheless, the following points must be taken into account to ensure the success of a hydroponic project such as l’Île aux Légumes :

There are a few fish in some ponds (wild carp, goldfish) which only account for 5-6% of the total fertilisation, i.e. a derisory share.

To date, the system is mostly in hydroponics and Jérémy would like to move progressively to decoupled aquaponics (for more details on aquaponics, see the article on BIGH). He plans to install a 30m3 outdoor pond next to the greenhouse to put in lake fish such as yellow perch or ash when the system is well mastered. The “dirty” water of the fish, loaded with nitrates, will then be used as fertilizer for the plants.

He would also like to set up a compost so that the juice can be recovered, which could also be a component of the nutrient solution.

With the production of the Île aux légumes, Jeremy has set himself the goal of supplying 25 restaurateurs in the Montalbana region, which would provide him with a salary.

Finally, Pierre and Jérémy would like to continue to develop their consulting activity to spread these water-saving off-soil farming methods, while continuing to build and develop this agricultural model.