An eco-village project in the Kashmir region.

It was with Guna’s help that Takmachik became an eco-village. This remote village in the Ladakh mountains of the Jammu and Kashmir region had to rebuild after catastrophic floods in 2010.

Neha Upadhyaya, founder of Guna, allowed residents to turn to a production of dried organic apricots. Previously they produced fresh apricots, using phytosanitary products and suffered many losses. In fact, apricots deteriorate in less than 2 days after harvest. But 2 days of trips are needed from the village to bring the harvest to the market. It was with the help of a researcher, Tashi Namgyal, that she was able to set up a suitable lowtech solution. A solar dryer was designed, bringing to two years the conservation of apricots. The dryer is easy to transport, to assemble and can dry up to 60kg of apricot per week. Powered by solar energy, this dryer makes the most of the 250 days of sunshine a year. The solar dryers reduced of the losses related to the problem of conservation by approximately 30%!

In addition to being a solution adapted to the needs of villagers, its cost is low, between 800 and 1000 INR (only 10 to 13 €) only! However, the price is still an important investment for them. It was necessary to obtain government aid covering half of the purchase of a solar dryer. The implementation of the dryer had two effect on the villagers income. First of all a rise, as going organic increased the price from INR 190 / kg to INR 535 / kg. Customers, attracted by quality rather than price, have remained loyal to the brand. Secondly it also enhanced income security, since dried apricots can be sold throughout the year. In a bigger picture, Guna supports better waste management. Organic waste is composted for crops. In addition an anti-plastic strategy is implemented on the whole village of Tikmakchik. Finally, nearly 70 households have a solar dryer but also a solar oven, another lowtech innovation carried by Guna. The solar oven saves 536 kg LPG (Liquefied Petroleum Gas) per family over 8 months (there is not enough sun for 4 months).

These actions are carried out in parallel with a desire directed towards women empowerment. In fact, most of orchards workers are women. In a country where a woman is raped every 13 minutes (reported rape, Crime in India – Statistics, 2016 NCRB) and a farmer commits suicide every 30 minutes (Reported Suicides, Accidental Deaths & Suicide In India, 2015 NCRB) Guna’s action is salutary!

The new economic dynamism brought by Guna has allowed the village of Tikmakchik to open a school! And given the success of its action, 8 other villages wish to appeal to Guna to become themselves eco-villages. 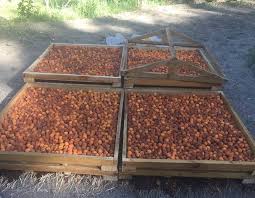