Analysis by the association: March 2018

The project was born from a double observation:

1. Large stocks of meat from METRO stores, collected by the Food Bank of Paris Ile de France (BAPIF) are discarded because of:

– sometimes too short DLC does not allow associations to redistribute them in time;

– regulations (Garot law since 2016) that do not allow associations to recover meat parts in large packages that do not have the technical capacity to process them 2. The food aid is marked by a deficit of proteins and fresh products of quality.

The objective is therefore to:

– fight against food waste by using products from BAPIF picks

– create positions and catering trainings, of reception and chocolate organizer for the employees in reintegration

– to improve the nutritional contribution of the food aid by proposing balanced dishes, made by a chef.

That is why the BAPIF has developed a partnership with the Table de Cana. It is a network of 9 integration companies across France, which has been existing for more than 30 years and employs 260 reintegration workers per year. There are two processing laboratories in Île de France, including the Gennevilliers one, which specializes in the production of buffets, cocktails, meals and the production of bio-fair chocolate. They obtained a derogation from the sanitary approval, allowing them to transform more than 250 kg of meat per week, employing 23 part-time employees, including 15 in reintegration.

The BACAME circuit is in partnership with an association of redistribution of meals to people the most deprived and a shelter center:

− 23 part-time employees, including 15 in reintegration;

−processing of more than 250 kg of meat per week;

−4 tons of meat and vegetables saved from waste from the beginning.

Before describing the functionment of La Table de Cana, one must first understand the organization of food banks. There are 79 Food Banks across France, however this project concerns in particular the food bank of Paris-Ile de France (BAPIF) .

The BAPIF recovers nearly 5300 tons of food per year, it is stored at two supply and distribution centers: Arcueil and Gennevilliers, representing a surface of 6000 m² in total. The food is then redistributed to 280 partner associations, as well as the Table de Cana.

These associations offer an average of 10.6 million meals per year which they distribute to 169,000 people per quarter. The stages of making meals by the Table de Cana de Gennevilliers:

The meat comes especially from the METRO store in Paris 18th (two days a week), Villeneuve (two days a week) and Nanterre (four days a week) stores, as well as other pick-ups that also collect vegetables. The signing of an addendum to the convention allows them to pick up meat in bulk packaging, intended for processing.

Sorting is done by BAPIF, in the center of Gennevilliers. The products are identified by origin, type and expiry date and then selected (meat, vegetables and starchy foods) and delivered to the Table de Cana.

3. The preparation of meals

The BAPIF delivers the food (approximately 35 kg of meat and 30 kg of vegetables or starches according to the arrivals) to the processing laboratory every Thursday morning. The preparation of meals requires between 2 and 4 hours for a total of 4 people and a production manager. Approximately 130 meals are prepared each week, recipes change constantly, depending on the products available.

The meat is cooked at over 63 ° C, thus extending the product life of 3 days. Cooked dishes are between 330g and 440g, depending on demand (or larger INOX tray size) and are delivered to the Tour Saint Jacques. The dishes are sold against a solidarity contribution of 1.5 € / kg. 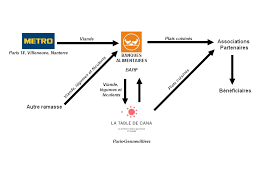 Diagram of operation of the BACAME project

• Reducing food waste and therefore CO2 emissions by maximizing unsold food and extending the life of products through processing.

• Limitation of the carbon footprint related to transport: all the stages take place within the same geographical area.

Several aspects allow to limit or offset the costs associated with the BACAME project, without creating a real economic benefit:

However, this initiative can not survive without:

Figure 1. Distribution of the project operating costs according to the different categories of expenditure (figure given by the Table de Cana)

Solidarity participation represents the remaining 10% to be covered in order to obtain a neutral economic balance sheet (compensation for transformation, delivery costs and salaries for employees, Figure 1).

There are two social benefits:

The Table de Cana has already proved its reproducibility from the point of view of social inclusion: the network is already made up of 9 entities, distributed throughout France. Nevertheless, the specificity of the BACAME circuit is based on the proximity of the kitchens with the warehouse of BAPIF (Gennevilliers), allowing the recovery of unsold food. The quantities of food available, as well as the demand, are specific to Île de France and an adaptation to the region is required. In addition, the company has only one associative partnership, these are difficult to implement, given the higher price of meals but are nevertheless essential to the implementation of the initiative.